Minerva's Owls of Bath - We found them all!

Update: August 2018 - NEW VIDEO! - Discover all the owls in this music video below:

After a very successful launch, all of the completed Minerva's Owls of Bath have landed on the streets of the city, ready to be discovered and ticked off your list (and phone app) in perfect timing too for the summer holidays and busy tourism season.

I was fortunate to have a preview of around 30 birds when they were displayed on the lawn of the Royal Crescent in June - At the time I had already discovered my favourite owl and expected I would probably try to photograph a handful more in their perch locations around the city. But, intrigue and temptation got the better of me, What if there was a new favourite out there? What other colourful birds would I be missing? So, I downloaded the app, laced up my comfortable shoes and set off to try to spot and photograph as many as I could.

I was bitten by the bug and feeling like a 10 year old again relished the thrill of discovering each new owl - so much so that I captured all of the 82 owls over a few days - travelling both within Bath and beyond.....Let's go catch them all!

First owl spotted - Bird of Play, by Artist: Complete Control - The charm in this owl is the fantastic teleidoscope eye which creates an amazing kaleidoscope pattern when looked through. The team at Complete Control are encouraging visitors to peer into the eye piece, capture the scene with a camera or phone and upload the photos to their Instagram account: @birdofplaybath

Standing proud at the wonderful wild garden on Walcot Street is Minerva, Goddess of the Arts and Magic (to name, but a few!) designed by artist Emma Rose. The colourful plumage dazzles inthe sunlight whilst her huge enchanting eyes gaze at passers by.

Ocatvius by Joanna Dewful is a perfect design for the Roman heritage of Bath - intricate tessera form a stunning mosaic pattern across it's entire body, whilst, my original favourite

Night Owl by Natasha Rampley has a similar concept, but this time, shards of mirrored glass form part of the facial plumage, with a stunning vibrant blue body and timepiece for an eye completes this beautifully crafted bird.

I initially found Hoops in a state of undress as it was still being created in Milsom Place, but now, a week later returned to the new home, outside the Sponsors Bath Rugby shop on Pulteney Bridge. It's a fantastic design, from the skull cap to the rugby ball tucked under the wing

Having a Hoot at Work by Nat Al-Tahhan

Milsom Street and Milsom Place had an abundance of owls to discover - with many hidden inside shops to lure you in, searching the shop floor for each feathered treasure. With this part of Bath complete and another batch of birds collected, it was time to move onto George Street

Having a Hoot at Work features brilliant doodles and also features a 'Where's Wally' element to the design.

Athene noctua is latin for Little Owl and this beaitifully realistic design by ATM Street Art (whose other work highlights threats to endangered species) simply put, is stunning. Those eyes, the giant orbs of yellow are incredibly realistic and have the ability to stop you in your tracks. Discover the little owl for yourself outside the Assembly Rooms on Bennett Street.

Owls are nocturnal creatures and so it's apt that the next discovery is a celebration of another night activity, astronomy. Herschowl by artist Lois Cordelia praises the achievements of the Herschel family and their contribution to this study of night sky - even discovering the planet Uranus from the back garden of the family home, now the Herschel Museum of Astronomy.

Isambird Kingdom Brunowl by Rita Lazaro - The famous engineer owl has taken up residence at Paddington Station in London for the time being before returning to Bath via Swindon later in the Summer - I was lucky to grab a photo before he flew on to the capital city.

Emily by Vera Carbin is perfectly placed in a central location of the beautiful Royal Crescent Hotel and dons a very nice hat, in celebration of Norland College's founder, home to the Norland Nannies. Emily wears the brown nannies uniform and reflects the caring nature of their work in cute images of owlets - echoing the caring nature of the organisation. 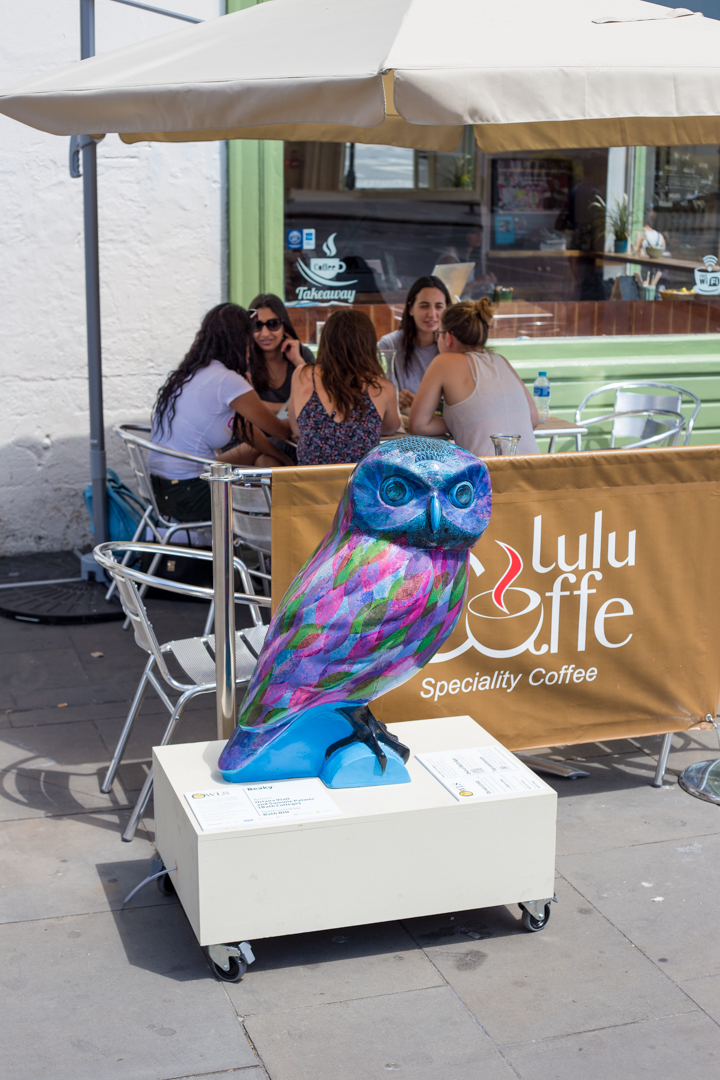 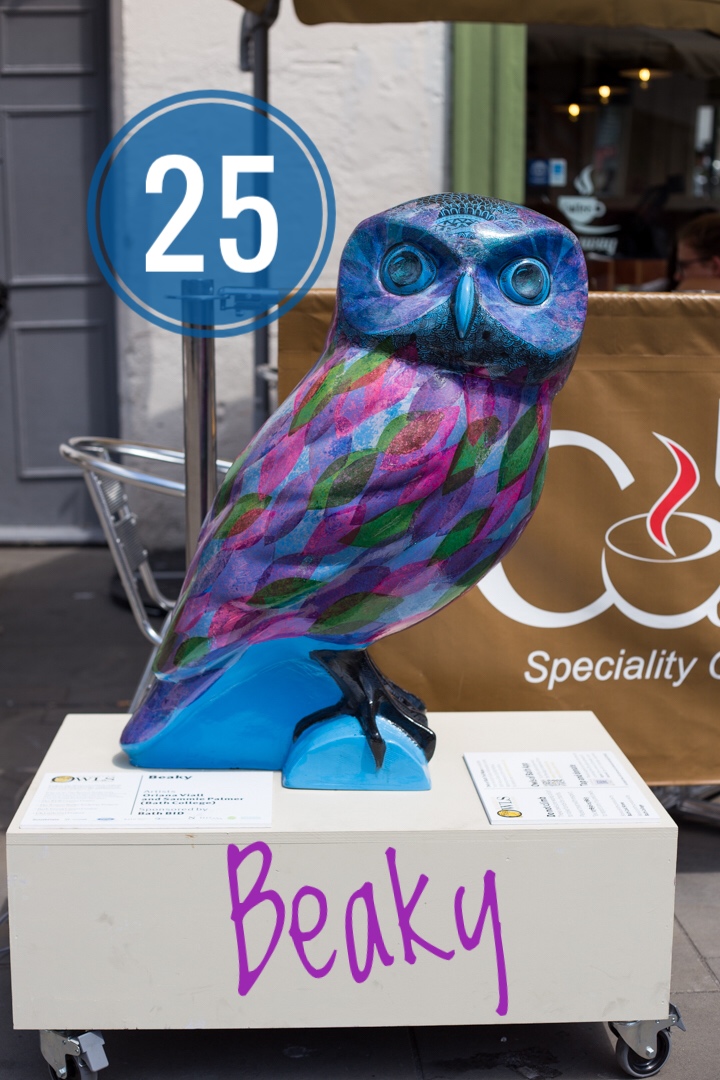 Beaky by Oriana Viall and Sammie Palmer resides outside a much appreciated coffee stop, Lulu Caffe.

Onward through the city and as my legs start to wobble I've taken refuge in the shade near Thermae Bath Spa where the next discovery has found roost. Spokes by Perry Harris

You'll need to keep your eyes pointed up to find the next bird, H'Owl Before It's Too Late who's found a perch on the Little Theatre's roof.

The Wise Renewab-Owl has an inspired plumage of solar panels whilst Sterling, like a magpie has been attracted to all that glistens in the dazzling Silver Shop of Bath

Bubo by Jane Skuse is a fantastically inspired legend from the movie, Clash of the Titans 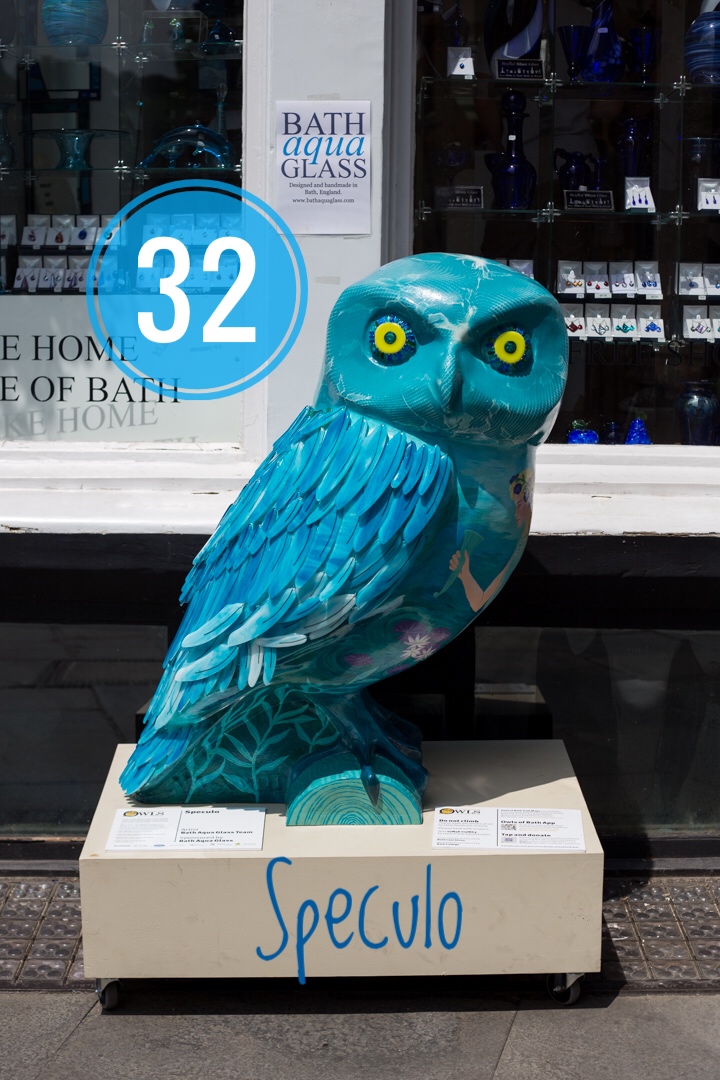 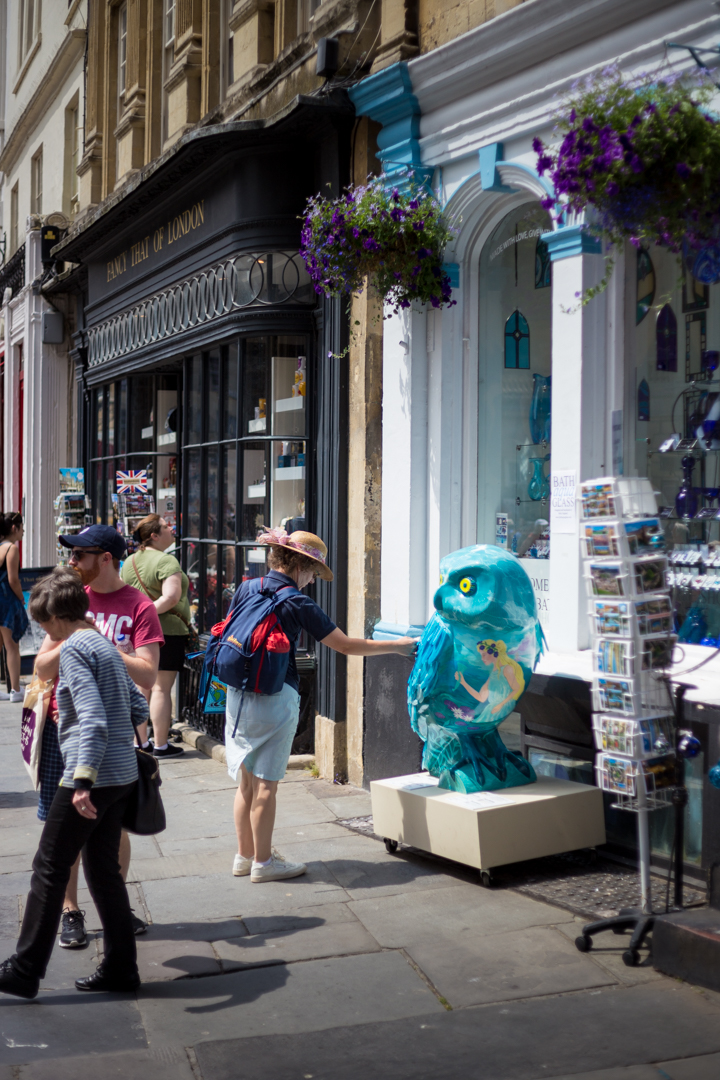 Speculo has been a labour of love - I watched with intrigue as each stage of the owls creation by the Bath Aqua Glass team was teased over social media. The best part for me, is the beautiful individually crafted feathers that adorn the body in a stunning turquoise hue.

As I continued pacing the streets I couldn't help but notice other owls popping up from behind the shop windows - was it a sign I was getting closer to the next set of birds? 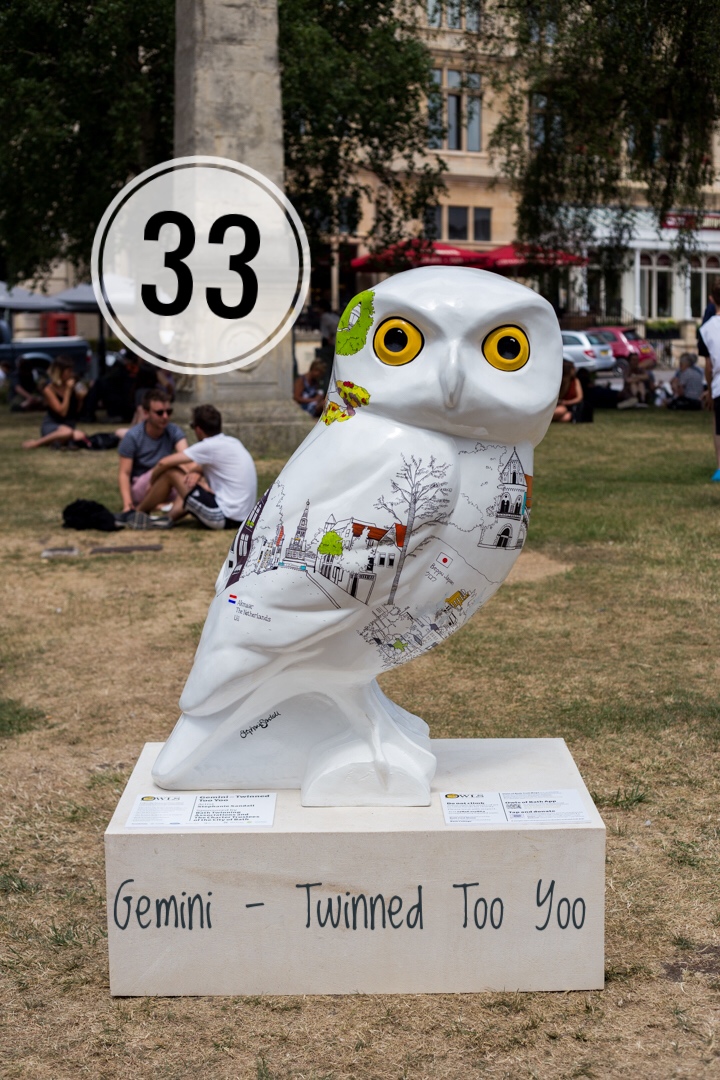 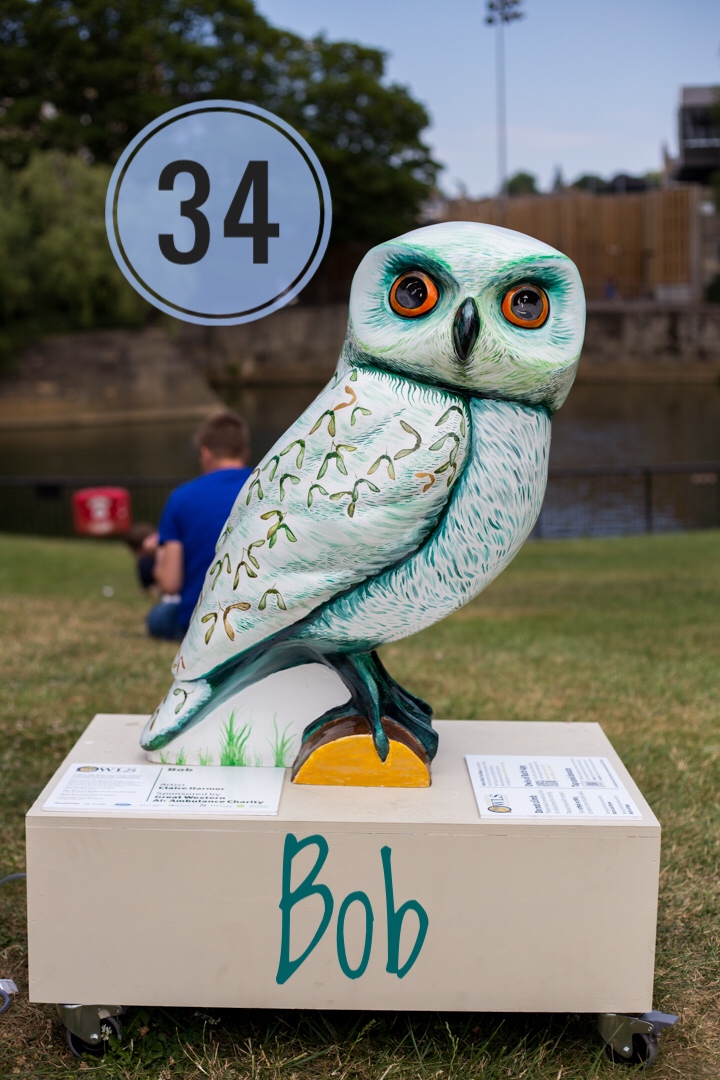 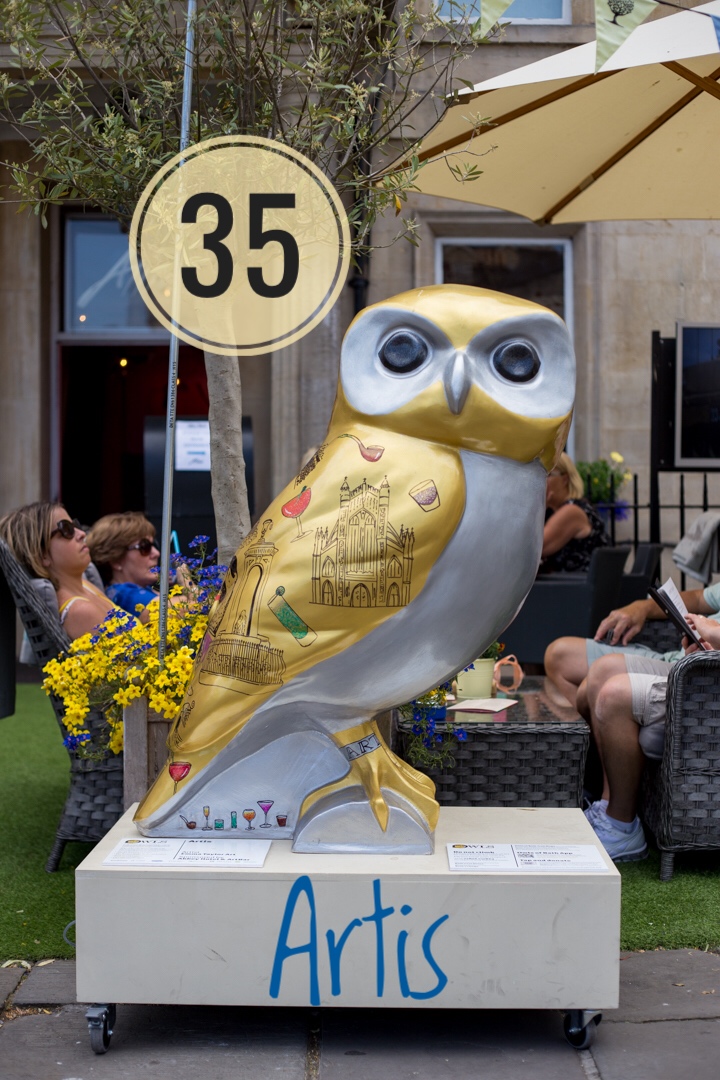 The golden glow of the next owl Artis draws me closer to the Abbey Hotel where they have announced a new owl inspired cocktail the 'Artis' featuring a base of Tawney Port and decorated with a zesty orange feather.

Pop down to the hotel on a Friday afternoon between 3pm and 4pm for free cocktail tasters of this delicious new tipple:

J.K. Owling by Jo McCarron features book spines as feathers, a colourful collection of local books where you can try to spot your favourites - extending on the theme that owls are wise birds.

Keeping a watchful eye over Sally Lunn's buns is Sea Owl - created to reflect upon the incredible behaviour of the Short-Eared Owl, who, every winter departs the Arctic on a journey of 100 miles to Britain in order to hunt. The artist Annabel Menhenott aims to raise awareness of these remarkable birds and to highlight the importance of preserving coastal environments.

It's hot here in the city - a unseasonably sunny summer so far and it's good to spend some time with The Y's and Where 4's owl under the mighty plane tree in Abbey Green. This owl actually has a different name and the challenge is to try to decipher the assorted letters (Y's) and numbers (4's) on its' plumage - to win a prize! The creator, Chris Dawson and sponsors MHA Morgans will release clues via their twitter account @theYswhere4s

It's cool here in the shade, surrounded by quirky shops and the faint smell of fudge drifting from the local sweet shop, where George resides - perched high above San Francisco Fudge Factory near the Abbey.

It's time to push on after a brief rest to the next owl, located at the entrance to the shopping hub of the city, Southgate - where you can find, standing proud amongst the shoppers, Metro Owl

Three more owls can be spotted in this part of Bath - each with a dazzling coat of paint and patterns:

Peafowl by Julia Trickey is a interesting twist on the owl theme - by taking the plumage of other birds and recreating this design under the title, Peafowl (which is the collective term for peacocks and peahens) Genius!

Ono by Bath Young Carers is a joyous owl! Lovely vibrant, splashy artwork reflects the imagination and spirit of young carers who are supported in taking time from their role to enjoy fun activities, supported by the B&NES Young Carers Project

The Owl & The Pussycat by Jane Veveris Callan features images from the brilliant Edward Lear poem of the same name - with scenes beautifully painted over a golden body - including Wisteria flowers which have been a central theme to this year's summer display at Southgate.

A popular bird and a firm favourite with many owl spotters is Cosmos by Tone Hitchcock. I love how there's more to see with this owl, with the inspired addition of a space helmet and jet pack this owl reflects the aim of the sponsors Rocketmakers who launch start up companies to stardom!

Emma by Joe Tymkow & Keynsham ArtSpace draws you close and hypnotisies you with huge swirling eyes - two large ammonite fossils reflect the 50th anniversary of the Keynsham flood in 1968.

Twit to Leave EU is a campaign bird, hooting its message for a Peoples Vote on remaining in the European Union, sponsored by Bath for Europe and created by artist Zib Baines.

I've taken a detour out of the bustling city to the calmness of the river Avon which has now started to emerge from it's slumber and looks fantastic through the wildflowers and public space created as part of the Bath Quays development. DigitOwl can be found here to share with you a glimpse of the future. Scan the QR code and you'll get a glimpse of the workspaces that will be attracting digital industries to the city.

The longest walking section of the Minerval Owl Trail awaits, I believe I may have planned this slightly wrong - but no bother, I'm over halfway through and next it's a trip to the vibrant mini-hub of Widcombe where the next owl awaits.

Vincent Van Owl - is a gorgeous reinterpretation of Vincent Van Goghs art style but with scenes of the local area featuring across it's plumage - The famous piece 'Starry Night' incorporates sponsors The Paragon School's current study curriculum, themes of light and dark but also the natural environment surrounding the school, where owls are regularly heard in their local woodland.

With this part of Bath ticked off, it was time to slowly make my way back to the central areas but first there's two more birds to track down:

Whoolio can be a tricky bird to find, but nesting just outside the new temporary reception to Bath Sports Centre you can find this owl, designed by artists Kat Button and Barbara Rae. The fabulous artwork reflects the skills of young people with special needs and explores the technique of 3D mark-making.

How apt the next owl is! It's Summer and she (I presume she's female judging by the bikini!) can be found at the magnificent entrance to the County Hotel. She's also got some company, but I will let you discover that surprise for yourself!

After all this walking it's time to recharge and kick off those shoes for a while and to relax on the beach. The County Hotel have created a tropical oasis in the city where cocktails, chilled vibes and great food are in plentiful supply. I had the opportunity to tip my toes into the sand recently and you can join me on the beach here on another blog post.

In the grounds of The Holburne Museum you'll find Seemore an interactive owl who's seemingly subtle plumage actual reveals a constellation of stars when you look a little closer. But that's not all, peer through his telescopic eyes to try and spot hidden mice reflecting the theme that owls are nocturnal and mice being a particularly tasty and staple part of their diet!